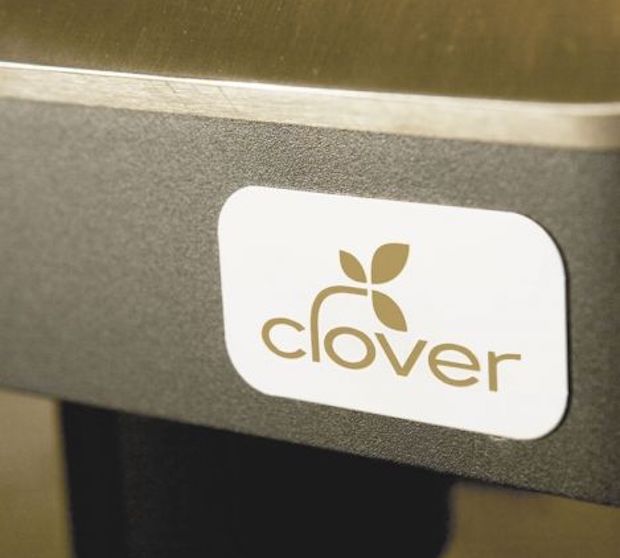 A Starbucks press release photo from 2013 shows the former Clover logo. At the time, Starbucks said it planned to double the amount of stores with Clover brewers, but the devices have since been largely phased out of deployment.

Among a rash of announcements circulating today from Starbucks’ annual shareholder meeting — including a change of leadership at the top of the company — an interesting tidbit of equipment news emerged.

Starbucks is bringing back the Clover. Specifically, Starbucks is launching the Clover Vertica, a freshly trademarked automated single-cup brewer, details of which remain largely under wraps.

Starbucks is in the process of rolling out the new single-cup brewers at stores in Minneapolis, as well as at its Reserve Roasteries, including United States locations in Seattle, New York and Chicago.

“The height of engineering, design and coffee quality, Clover Vertica reimagines the brewed coffee experience for partners and customers through a patented process that combines innovative vacuum-press technology with precise control over the temperature of the water and length of brew,” Starbucks said of the machine launch today. “This technology ensures that every cup of coffee is brewed to the specific roast and blend specification for the best flavor from each bean, resulting in highly defined flavors.”

Several of those descriptors were used by Starbucks some 14 years ago after it acquired the original Clover brewer and brand from Seattle-based The Coffee Equipment Company. Invented by Zander Nosler, the Clover was touted by Starbucks at the time as being at the vanguard of automated coffee brewing.

Prior to the Starbucks acquisition, the Clover caused such a stir in the high-end coffee marketplace in 2007 that The Economist declared, “Move over espresso, a new machine could reshape specialty coffee.”

By 2013, Starbucks had announced plans to send Clover brewers to more than 1,000 U.S. stores, although the plan for widespread adoption never came to fruition.

Seeking yet again to reshape specialty coffee brewing — or at least automate single-cup pourovers in slower times when the batch brewers are shut down — Starbucks plans to deploy the Clover Vertica machine to all company-operated U.S. stores by 2025, with the first wave coming this fall.

In addition to the Clover relaunch, Starbucks is continuing to roll out the Thermoplan-AG-made Mastrena II superautomatic espresso machine to all U.S. stores.