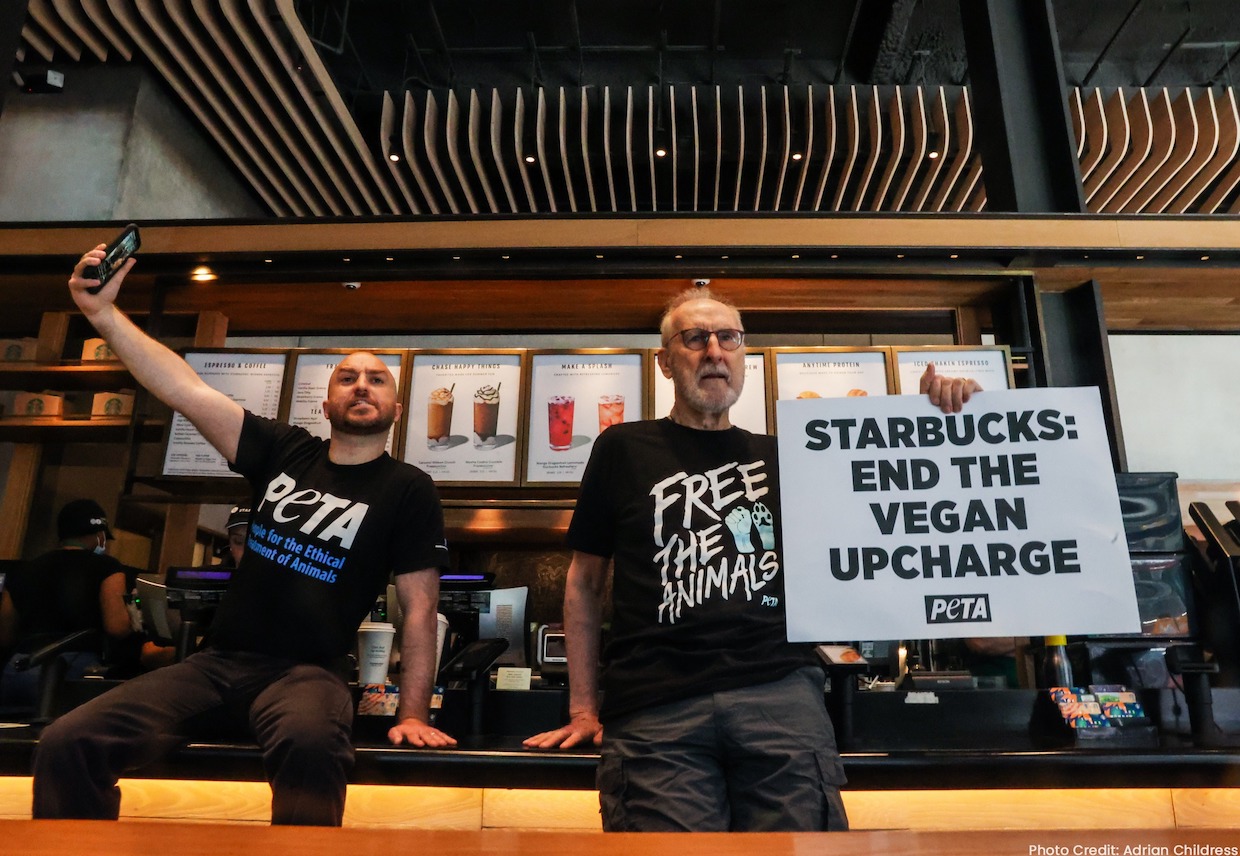 Acclaimed star of screen and stage James Cromwell yesterday glued his hand to a Starbucks coffee bar in Midtown Manhattan and called for the end of higher costs for drinks made with plant-based milks.

The “glue-in” lasted just over 30 minutes and was live-streamed by the animal rights organization PETA. Cromwell’s hands were eventually cut free of the glue and police made no arrests.

“My friends at PETA and I are calling on Starbucks to stop punishing kind and environmentally conscious customers for choosing plant milks,” Cromwell, the star of major motion pictures such as “The Green Mile” and “L.A. Confidential” said. “We all have a stake in the life-and-death matter of the climate catastrophe, and Starbucks should do its part by ending its vegan up-charge.”

Ironically, Cromwell began engaging in animal-protection-related activism during the shooting of “Babe,” the critically acclaimed tale of a farmer and his sheep-herding piglet. In 2017, the “Succession” actor was arrested for trespassing at Sea World while denouncing the treatment of orcas.

In yesterday’s statement, Cromwell asked the coffee company, “When will you stop raking in huge profits while customers, animals and the environment suffer?”

In a statement from Starbucks shared by NPR, a company spokesperson said, “Customers can customize any beverage on the menu with a non-dairy milk, including soymilk, coconutmilk, almondmilk, and oatmilk for an additional cost — similar to other beverage customizations such as an additional espresso shot or syrup.”

The statement went on to say, “Pricing varies market by market.”

While Cromwell and PETA have called for the end of an “upcharge” or “surcharge” to drinks made with plant-based milks, coffee shop operators are left to determine pricing based on a number of factors, including the cost of ingredients.

Coffee professional and founder of the Keys to the Shop podcast and consultancy Chris Deferio told Daily Coffee News that drink pricing tends to be fundamentally amoral — i.e. not concerned with “right” or “wrong.”

Plant-based milks have continued to gain traction as an alternative to cow’s milk in the United States coffee industry.

“As amoral as I think it is, people are free to moralize their cafes,” Deferio said. “And I think more power to them.”

Deferio said plant-based milks may cost coffee retailers, who are already working with notoriously slim margins, three or four times more than cow’s milk, simply due to costs of production. Operators must therefore determine whether plant-based drinks will reflect the actual cost of ingredients or whether an up-charge will be applied elsewhere in the menu to compensate.

“The facilities that make plant-based beverages that are worth having at your bar are making them in far smaller quantities than dairy manufacturers,” Deferio said. “They make it as expensive as they do because it’s more expensive to make… It is a reality of the market that sustains the availability of that product.”