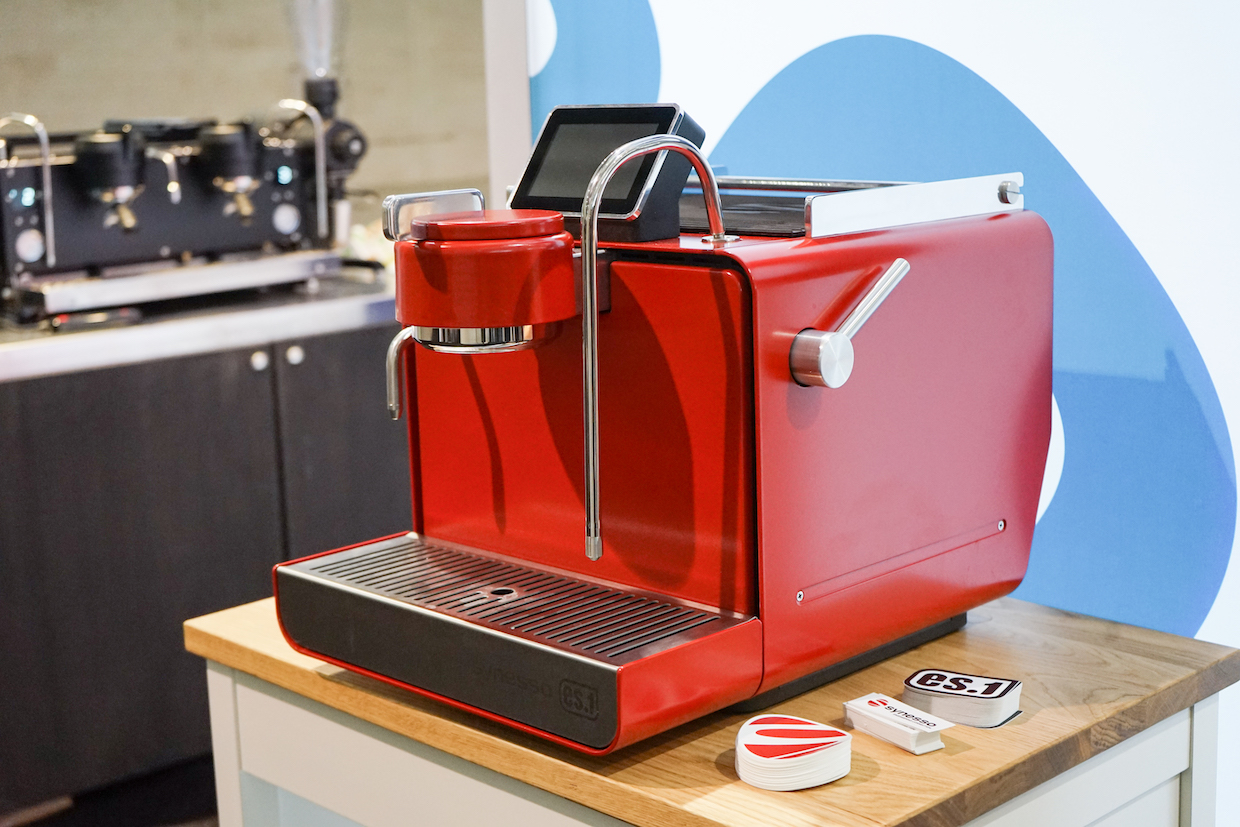 The first major release since Seattle-based Synesso was acquired by Illinois-based foodservice equipment company Middleby Corporation in 2019, the machine made its public debut at the Specialty Coffee Expo in Boston. 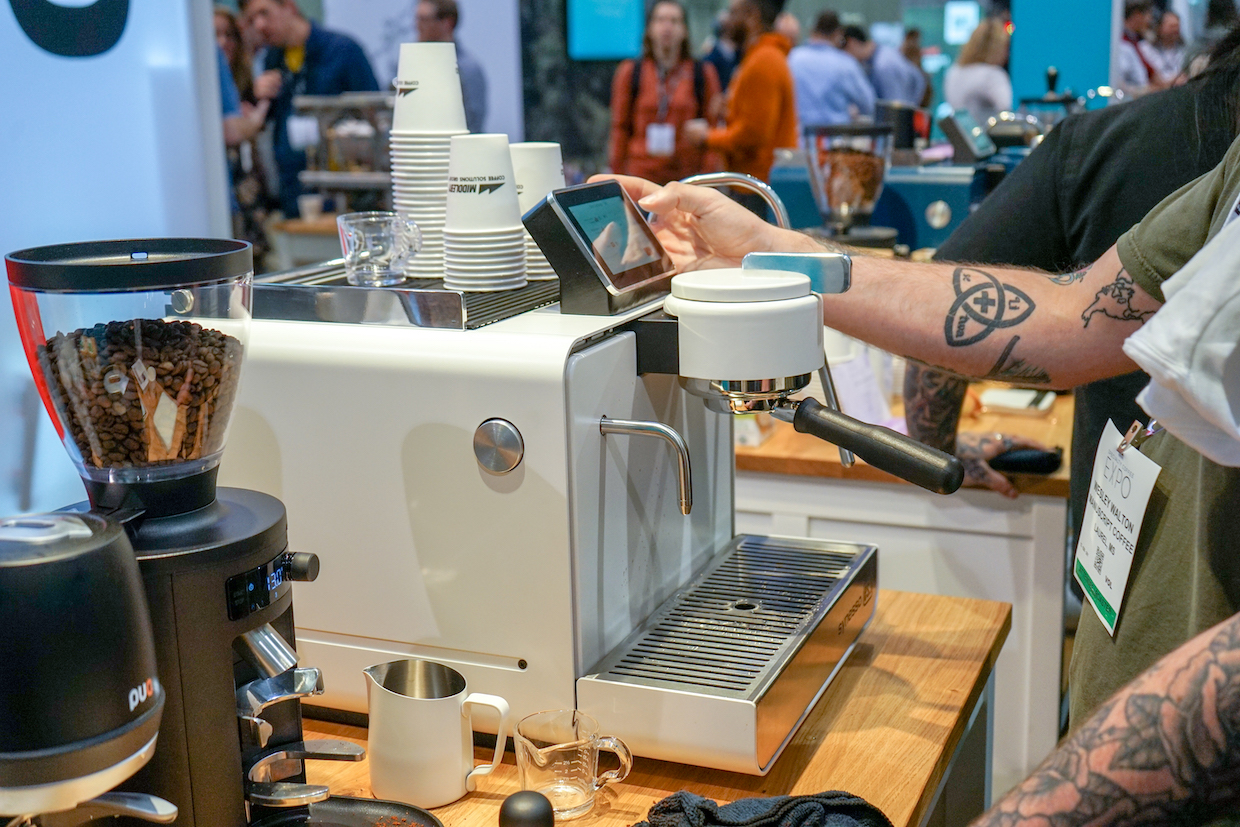 The dual-boiler ES1 runs on standard 110V/15amp residential power and incorporates the company’s patented MVP (Manual or Volumetric Programming) technology, which allows users to choose between manual control over volume and pressure in real time or to automate the delivery of water to the coffee using built-in software.

“It’s a Synesso through and through, with professional performance, pro-spec components and clever engineering to achieve Synesso’s legendary temperature stability on residential power,” Middleby Coffee Solutions Group Brand and Marketing Manager Matt Jensen told DCN. “The unit delivers on the best of what Synesso’s known for, in a clean-line design that blends beautifully into homes.” 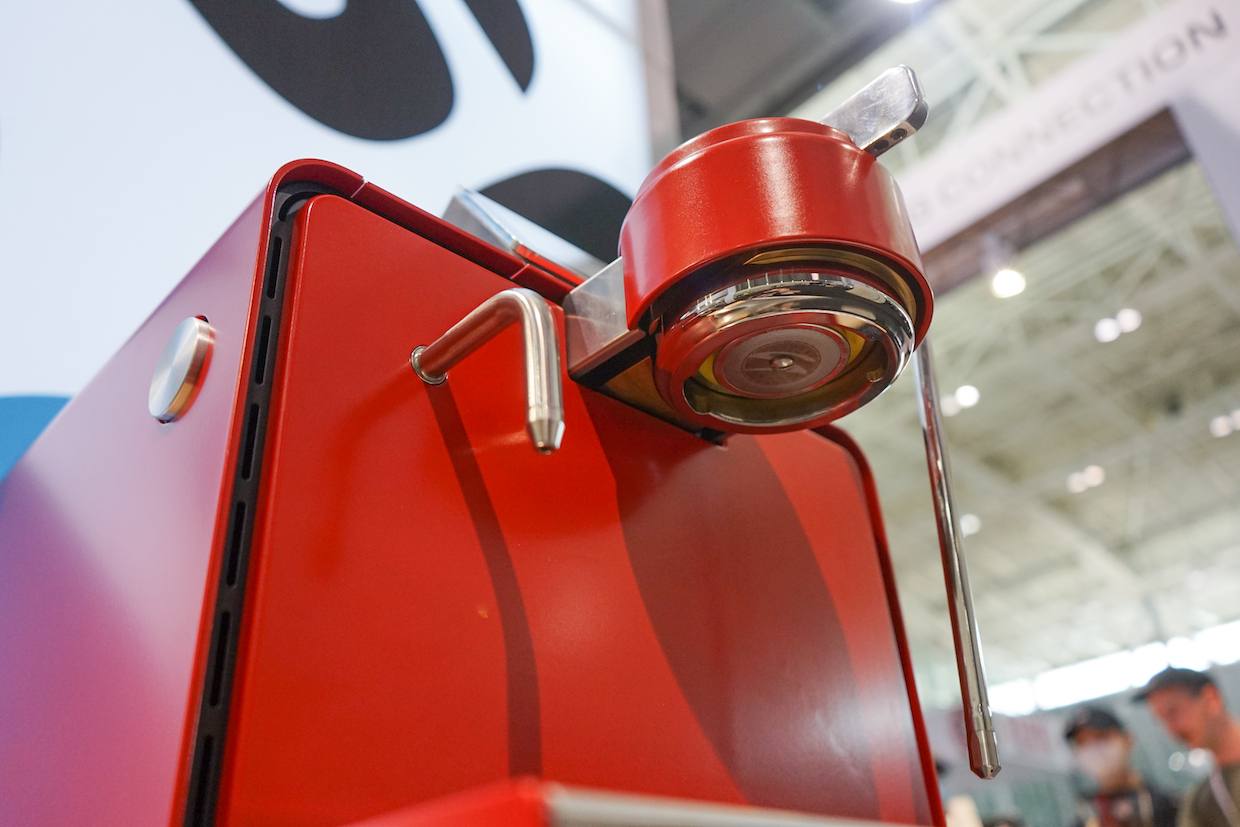 The machine, which is named after early Synesso engineer Eric Schaefer, a new feature Synesso is calling Automatic Preinfusion, through which data gathered from pressure sensors in the brew chamber can trigger automatic changes to the flow rate.

Sensors guide the machine through recipes that the system divides into three phases: pre-infusion, infusion, and ramp-down. Baristas can set parameters for each phase of a shot in advance, either by specific pressure levels and durations, or as overall percentages of a final target volume.

Settings are adjustable via a digital touchscreen interface mounted on the top of the machine, while activation of the shot is made manually using the paddle switch on the group.

Users can also designate a pre-infusion pressure, max pressure and ramp-down rate, then trigger these phases manually using the paddle switch on the group. The system records these shots, as well, for potential automatic repetition.

“You have the ability to be about as automatic as you would want to be, but at the same time, we still have paddle engagement for [activating an espresso]; the steam valve is still a manual steam valve,” Ryan Willbur, Director of Sales and Strategy for Middleby Coffee Solutions Group, told DCN. “We wanted this to be a very tactile machine — something that feels like you’re getting to make a great coffee at home. And on the other side of that, for roasters that want to do events and pop-ups, we wanted it to be something that was super familiar and felt as heavy duty as a commercial machine for them in those light-duty settings.” 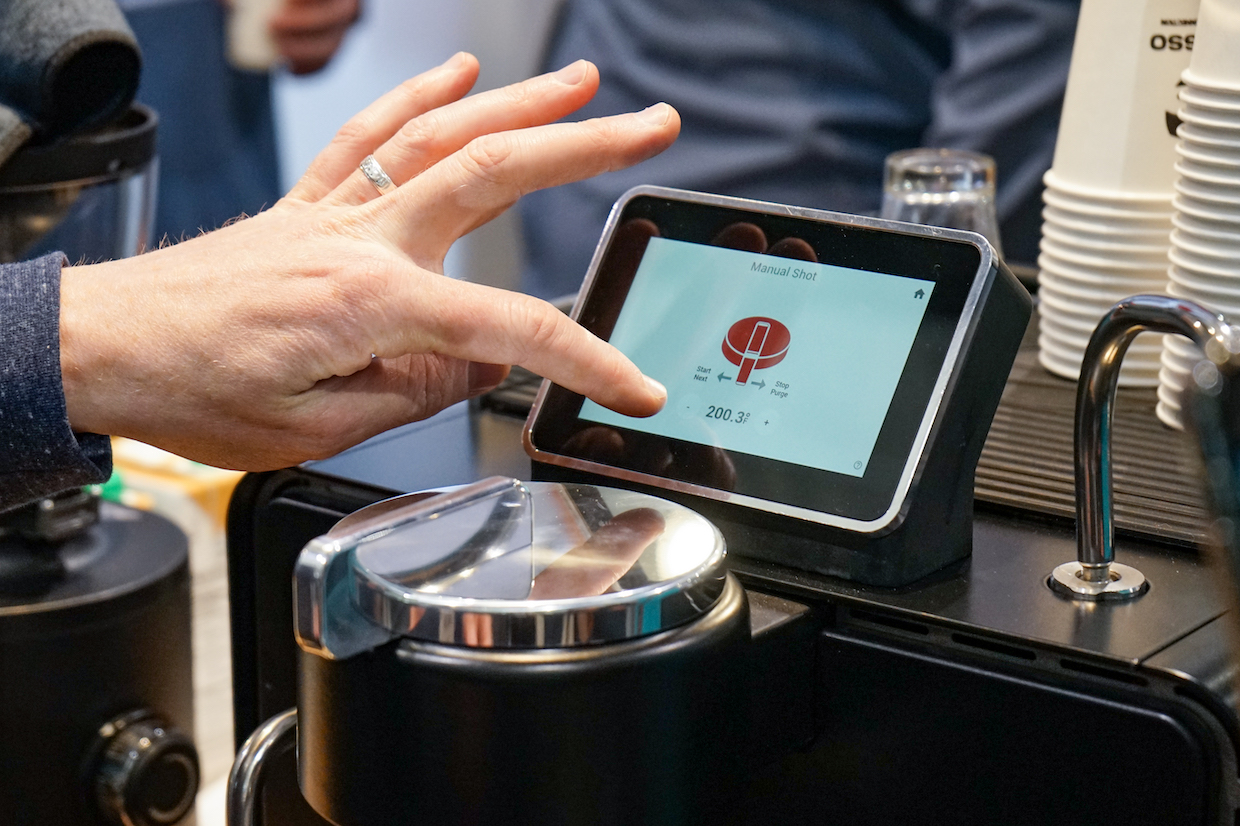 Initially the ES1 will grant a single temperature/volume profile for the tap. Future software upgrades will allow for the system to store multiple water profiles, as well as additional features for controlling espresso extractions.

“We see the operating system of this machine as being the future we want to build on,” said Wilbur. “The advantage of [the system] is that a large part of the framework that’s going into how we’re driving pressure and controlling extraction is something that we’ll be able to build different algorithms for over time, to develop new ways of being able to either automate or manipulate extraction.” 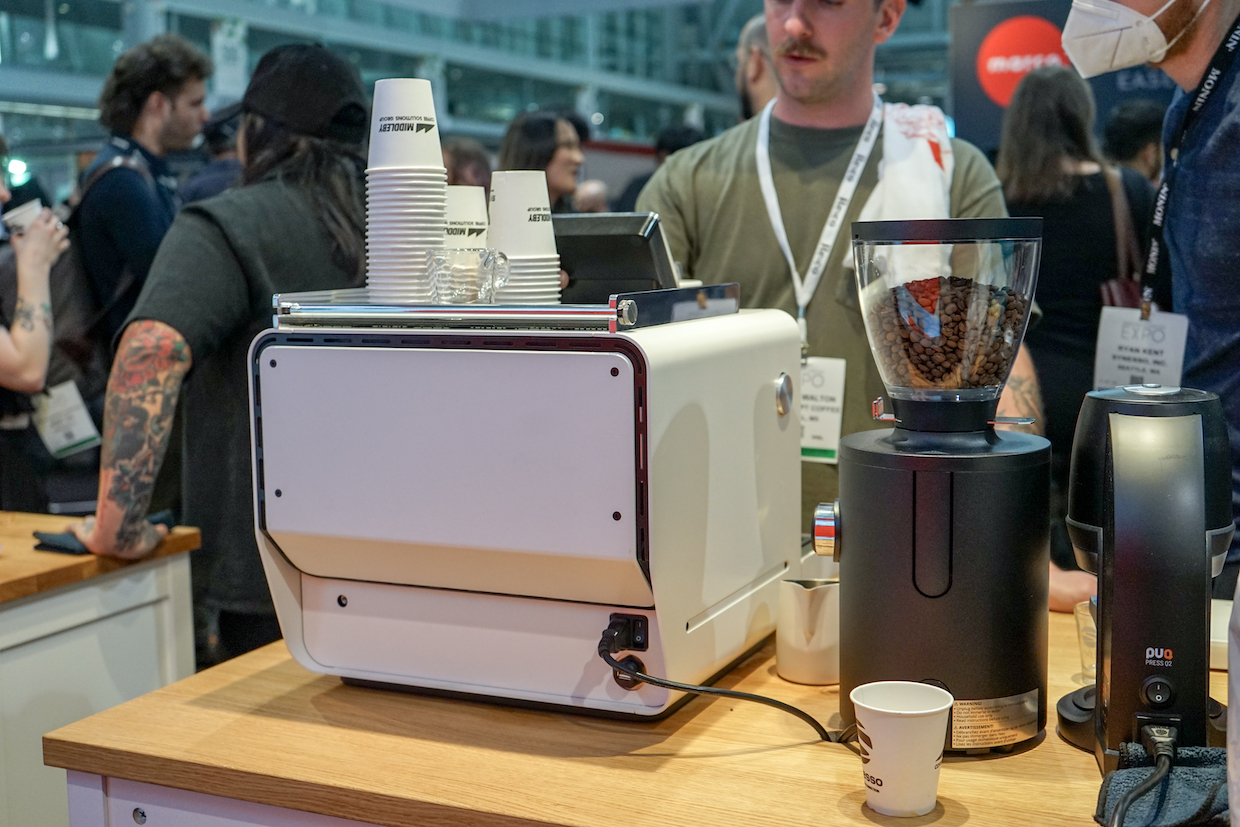 The ES1 is Synesso’s first new machine model since the launch of the S line of compact commercial volumetric espresso machines in 2018.

The 80-pound prosumer machine’s 3.25-liter steam and half-liter brew boilers, both stainless steel, can be replenished via a direct water line connection or from an onboard 3-liter reservoir that is accessible through the front of the machine. Steam wands remain cool to the touch, and at launch the machine will be available in blue, red, black or white.

A working demo ES1 machine is now pulling shots at the SCA Expo. Pricing will be announced ahead of a sales launch expected to take place this early summer. 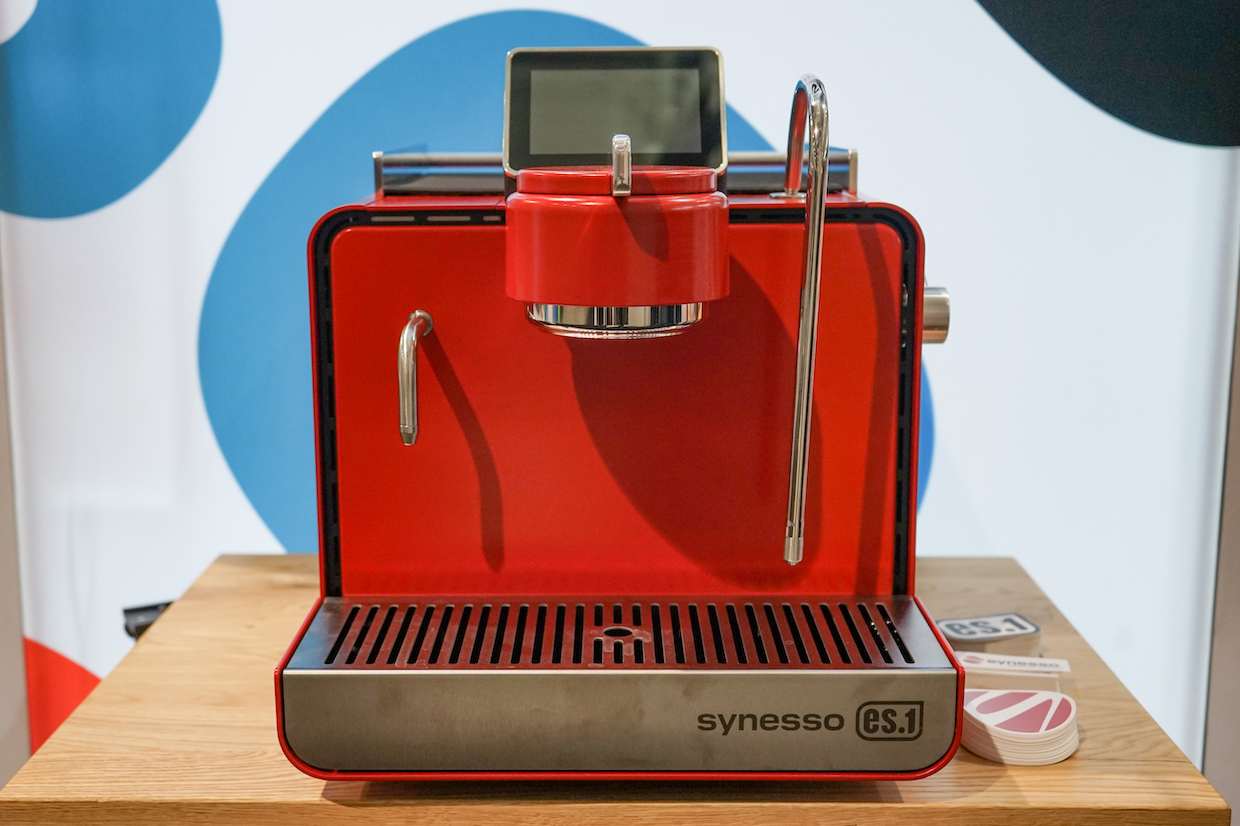